A bond is a type of debt security, and some bonds are traded by investors. Three of the most well-known bond types are the corporate bond, the government bond and the municipal bond.

A corporate bond is issued by a corporation that wishes to borrow money, e.g. to finance a business expansion or to be able to carry out an acquisition. For a corporation, issuing bonds is an alternative to other types of financing, such as borrowing money from a bank or issuing new shares and selling them.

To make corporate bonds more appealing to investors, corporations can elect to tack on special perks when issuing bonds. There is for instance the convertible bond, which can be converted into equity in the issuing company, if certain terms and conditions are met. There might for instance be a time-line that must be adhered to, where no conversion can take place until a certain number of months or years have passed after the issuing of the bond.

A majority of the corporate bond trading takes place over-the-counter (OTC), but there are also standardized corporate bonds that are listed on exchanges. 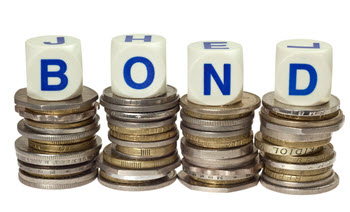 Corporate bonds intended for trading are normally issued in United States Dollars (USD) or Euro (EUR) even when the company is based in a country with a different official currency. Making your bonds easier to trade can help attract investors.

Interest rate competition can also be a factor when a corporation picks the currency for a bond issue. In early 2015, the yields on Swiss government bonds was not even low – it was negative! To take advantage of this and offer an alternative to investors, USApple Inc issued corporate bonds in Swiss-francs.

A government bond is issued by a national government. These bonds are usually denominated in the official currency of the issuing country. Both the credit rating of the issuing country and the potential for inflation / deflation of the national currency must then be taken into account when the risk-level of the government bond is assessed. In order to make the bonds more appealing to investors that worry about inflation, some governments issue inflation-indexed bonds, where the face value payment and the interest payments are linked to a consumer price index.

A municipal bond is issued by a city, local government or similar authority. Municipal bonds are especially common in the United States, where even small entities such as an individual school district can issue bonds. A large market with high liquidity exist for municipal bonds within the U.S.

In the United States, the issuer of municipal bonds doesn’t have to take on a general obligation for the bond. Instead, the issuer can elect to link the bonds to specific revenues. Of course, doing so can impact how appealing the bonds are to investors.

In the United States, there are states where interest income from municipal bonds are exempt from state income tax or from certain local taxes.